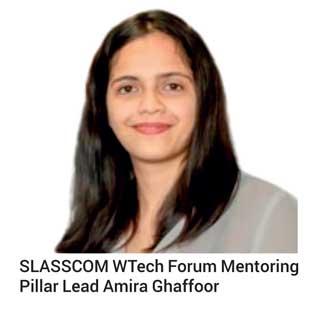 The Women Technopreneurs Forum (WTech) of Sri Lanka Association for Software and Services Companies (SLASSCOM), having mentoring as a key pillar in its approach to support, promote and grow women technopreneurs, has outlined a two-pronged approach to mentoring, that will include providing services to first-level technopreneurs with a feasible idea or those have been in operation for less than two years, and in helping them gain insights and training from another successful female entrepreneur.

Amira Ghaffoor, the Mentoring Pillar Lead of WTech and Founder/CEO of Northwood Consulting and a recipient of the award ‘Emerging women Tech entrepreneur of the Year 2021’ at the SLASSCOM Ingenuity Awards said, “At WTech, we work with women who want to return to an IT career through entrepreneurship, after having left it for personal reasons. We support them in identifying ideas, improving them and realising their potential.”

Amira’s own story in this sense is a prime example. With over eight years of experience in marketing and technology, Amira founded Northwood Consulting as a technology agency in 2017, and within a span of four years evolved it into a full AI Technology Agency with its own products.

“My passion for sales, technology and innovation led me to start my own venture. I was propelled to pursue technology seeing its market potential here and overseas. Although my education is in law, I’m humbled to say that today, with the least background in technology we have been able to build Artificial Intelligence and IOT products that are being trusted by reputed brands in Sri Lanka. It takes immense dedication and courage to build trust with stakeholders in this field, and it’s something we are seeing our company achieve quite well within a few years.”

Giving an insight into the forum’s activities, she said that the forum launched a pilot project where it picked three female entrepreneurs to be mentored for three months. “Once we completed this, our objective was to increase the number of mentees and we are about to embark on our second mentoring program in collaboration with IFC on a larger scale. We intend to expand the program to cover the entire country,” explains Amira.

The potential mentees of this program have been chosen based on the Mass scale survey carried out last year in which prospective entrepreneurs were asked to map their stage in the technopreneurial journey and identify three key objectives to work towards with the programme. The women only hackathon carried out in January this year in which 15 different teams were asked to submit and present their proposals on Tech businesses underwent a six month mentoring program, and were given the opportunity to be a part of a bootcamp and to remain as part of WTech , continuing to get assistance on other areas, beyond the initial objectives.

Amira emphasised, “Most people think that technopreneurship involves businesses that are 100% technology-related, but it is also about businesses with either an eCommerce presence or with the potential to be digitalised. Another challenge we face is to create awareness among female technopreneurs outside Colombo due to the mind set of culture within these areas although there is so much potential amongst the females in these areas.”

Amira encouraging aspiring technopreneurs stated, “Don’t limit yourself and take the first step to find out about how you can be a technopreneur. When you get to know other women technopreneurs, you will be inspired to find something you’re passionate about, one which will go hand in hand with your personal priorities,” inviting women to “get connected to WTech and seek their

support for their entrepreneurial journey.”

/%postname%/
#
Sort Gallery
on
yes
yes
off
on
off
off
X